Every once in a while we have to deal with an infrequent but annoying problem. Of a discolored front tooth. Anywhere else in the mouth this subtle but slowly progressing change would have been ignored or worse remained undiagnosed until symptoms appear. Being the teeth in the front and in the smile framework it is essentially a problem with esthetic ramification. But what choices are available for its treatment? That depends on the initial diagnosis of the reason for the discoloration.

The most common reason for a tooth gradually becoming discolored is because of a dying nerve tissue at its core. As the tissue inside the tooth dies the breakdown that ensues releases chemicals and some of these stain the inner layers of the tooth. This dying of the nerve might be gradual and devoid of any symptoms or sometime it might be associated with a small gum boil right at the base of the tooth. The most common reason for the nerve to die out is usually a history of injury. The injury might have been sustained when they were kids. Most of these individuals would have also forgotten the initial injury that they would have sustained as kids. Most of these teeth end up requiring a root canal treatment as a starting point.

The traditional options for treating a tooth like this would have been to either shape the tooth for a crown and use the crown ceramics to hide the darkness or try to whiten the tooth. The crowns end up being made either opaque in order to block the discoloration or very thick. They are expensive and subject to remakes in time as the gum changes its contours with time.

The conservative alternative is internal bleaching, where a chemical (Sodium Perborate) is placed in a chamber in the back of the tooth and sealed and in time it works its bleaching magic from within. 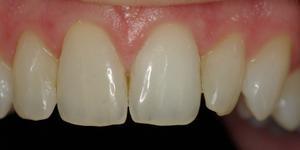 This is the result after 6 months and 2 internal bleaching pack changes. Seal the chamber when it is finished with a filling material and the case is done.

It costs a fraction of crowns, does not require any impression, temporary crowns or shade matching worries.

Patient F presented to the office for her 6-month Re-care appointment, when it was noticed that # 24 had a facially draining abscess. Radiograph below shows mandibular anterior teeth with extensive bone loss with periapical lesion on # 24.

I have always wondered, that skilled as we might be to work magic with the modern day dental materials, are we really comfortable in prognosticating the results of our work?

Male patient in late 40s with extreme wear and awareness of habit of heavy teeth grinding. The patient is interested in repairing the damage but does not have the financial resources to take on this large a reconstruction all at once.